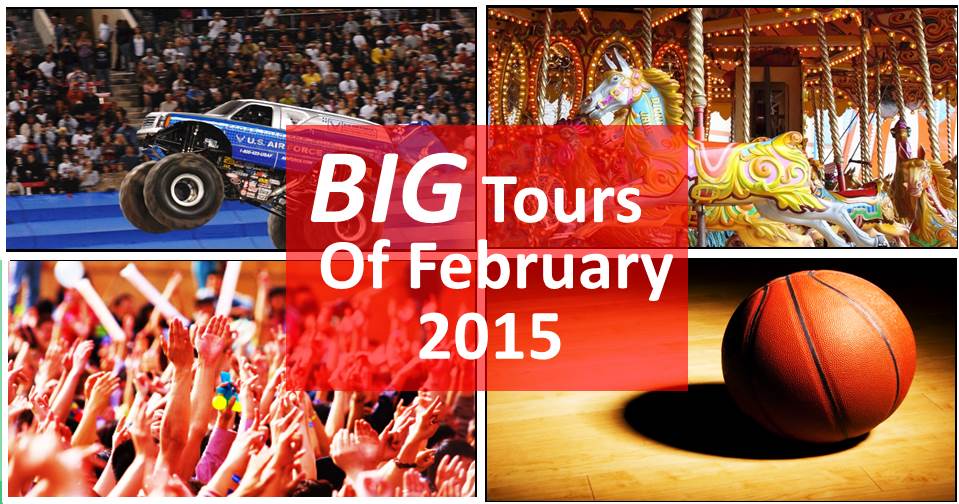 One month into the New Year and we’ve already seen some of the best shows, events and concerts around the US. February started with the headline of New England Patriots winnings the Super Bowl. To keep that hype up, we’re giving you a list of other notable events featuring this month. Here’s who will be rocking February.

From the world of racing comes another adrenaline-fueled event; the Monster Energy AMA Supercross. It is an off road motorcycle racing that takes places on artificially made tracks. The main challenges are the various obstacles along the track and the steep jumps. Since the mid ‘70’s, the show has created millions of motor heads that have followed their favorite biker through time and arenas. In February, the Monster Energy AMA Supercross is going to take place just a couple of times. It will be hitting the dirt in the states of California, Texas and Georgia. So make sure you don’t miss the event.

The Professional Bull Riders is one of the heralding bull riding organizations in the world.

It was formed around two decades ago when twenty one professional bull riders pooled in their own earnings to finance the startup. Since then, it has brought forth a long list of winners on the PBR World level, the Touring Professional Division level and the World Final level. The winners of these have been from the US, Australia and majorly Brazil. Around twenty bulls have also been awarded with the title of ‘Bull of the Year’ with a few winning multiple times and even consecutively. Each rider has to stay on a bucking bull for eight seconds. The performance of the rider and the bull is judged to sort out the champion among all. PBR is bringing more than twenty ones events this month. So head out to the nearest one and enjoy the show!

One of the biggest and the most adrenaline-rushed sporting events of the year is the Monster Jam. Captivating audiences from all corners of the US, the huge monster trucks and their drivers have earned a devout fan following. The show itself is divided into various categories featuring competitions from a wheelie competition, donut contest to racing. The judges decide which truck scored the highest and the winner gets the trophy. The ‘Pit Party’ is the biggest attraction for all the fans as they get to meet their favorite drivers and their trucks in person. This bonding between celebrities and fans is one of a kind all through the US. Monster Jam is here to crush the month of February with around ninety events. So gear up and watch the show!

The Harlem GlobeTrotters is one of US basketball teams that play exhibition games. Owned by the Herschend Family Entertainment, they are most recognized for their comic acts on the court. The first roster was formed in 1926 and since then, they have been featured in over twenty thousand games. This career of more than eighty years has kept them headlining all across the states and courts. They have become one of the most iconic sports franchise with appearances in television, cartoons and even movies. Dressed in jerseys of blue, red and white of the nation, the basketball team will be visiting major courts in February.

Nearing almost a century of highly praised performances, Ringling Bros. and Barnum & Bailey Circus have kept to the tradition. Decades of determination, hard work, creativity and artistry have revamped the Ringling Circus to keep it fresh and alive. It displays various shows featuring magnificent beasts, majestic big cats, oriental acrobats, hilarious clowns and numerous feats of endurance. For February, the Ringling Bros. and Barnum & Bailey Circus will be touring the eastern states. You will have a wide variety of shows to choose from such as Legends, Circus XTREME and Built to Amaze! The test of time has indeed made the show deservingly referred to as “The Greatest Show on Earth”.

Two years on and the Snow Queen and her sister are still fascinating Disney fans and people of all ages. The wintery tale of the animated movies was the ideal show to bring under the Disney On Ice umbrella. So last year, Feld Entertainment and Disney brought the popular residents of Arendelle to the ice rinks. Since then, the show has been loved, appreciated by millions. It adapts the story from the animated movie and features Elsa, Anna, Olaf, Kristoff, Sven and the Trolls. So if you or your little ones are Frozen fans, head out to Chicago, Boston or Illinois to catch the ice show!

The Marvel superheroes and super villains have travelled from out of the comic books to the cinema screen. Now they’re coming to the stage in a joint venture by the Marvel Comics and Feld Entertainment. You will be able to see some of your favorite characters in theatres fighting the good fight against the sinister forces. The battle between the forces of evil (lead by Loki along with Red Skull) and the good guys will decide the fate of our planet. You name them and the character is in the show; Thor, X-Men, Spiderman, Wolverine, Iron Man, Hulk, Captain America, Madame HYDRA, Green Goblin and many more! The national tour for Marvel Universe Live! will take the comic book characters to over twenty cities for the month of February. So make sure you catch the show when it comes to a city near you!

Premiering almost four years ago, The Book of Mormon has lined up a number of accolades for itself. The musical has won major awards that include nine Tony’s, five Drama Desk Awards, four Olivier’s and a Grammy. It comes from the creators of the world renowned animated comedy South Park. Matt Stone and Trey Parker worked with Robert Lopez on the music, lyrics and the book for the musical. It tells the story of the Elders Price and Cunningham who go on a Mormon mission to a remote village in Africa. Almost the entire month of February is scheduled to play The Book of Mormon at the Eugene O’Neill Theatre on Broadway. The touring cast will be visiting a few major cities such as Chicago, Dallas and Kansas City among others. So if you’re close by, make sure to hit the theatre to see the phenomenal musical.

If there’s one man who knows how to party and how to fan-service the audience, it’s the singer and dancer Chris Brown. Just in 2014, he concluded his studio albums count to half a dozen with the Billboard hip hop chart-topper X. This month, he is collaborating with friend and fellow hip hop musician Tyga on the album Fan of a Fan: The Album. The two are taking rapper Trey Songz along on a ride through the US for the inauguration of the album. The trio will be performing at cities such as Dallas, Houston, Fort Lauderdale, Detroit, Washington and Cincinnati among others. By the end of the month, the album will be released to join the ranks of the hit lead single “Ayo.”

Uncle Charlie is at it again! The man, the singer and the legend has made millions of fans in a career that spans over four decades. If R&B lovers weren’t amazed enough, he went all out this year and released another album right before February. The album titles on the same trend as its predecessors by adding his name Charlie. This one is nostalgically called Forever Charlie and marks as his seventh solo studio album. For the promotion of his album, the nine time Grammy-nominee is now out on a nationwide tour for the month. Joining him on stage are good friends and R&B musicians Kem and Joe. His stops include eastern coast arenas such as Royal Farms Arena, PNC Arena, Boardwalk Hall and United Center among others.

These are just a few of the big events happening this month. Other events that will keep you busy through the month are the Disney On Ice shows such as Let’s Celebrate!, Princesses and Heroes, Worlds of Fantasy and Treasure Trove.

Sports fan, especially motor heads, February is your month, so go out and claim the arenas for your favorite bull riders, monster trucks drivers, off-road bikers and basketball players!

Kids will love the attractions of the Disney On Ice shows and the Ringling Circus. For the mature audience, The Book of Mormon will be a feast for the mind as well as give you laughs. So grab your tickets now and enjoy February!